Apply for mentoring Apply to be a Mentor 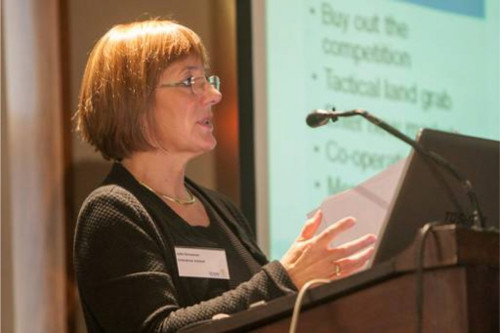 Julie Sinnamon the CEO of Enterprise Ireland addressed the SCCUL Mentors Group in the Clayton Hotel Galway. There were a number of issues addressed and also many ‘good news’ stories around different industries throughout Ireland.

Julie is extremely optimistic about the prospects for the food sector and anticipates a 50% growth in that sector over the next 5 years. She sees much of the growth in this sector being located in the regions. This ties in with a broader objective to ensure a balanced distribution of EI support across all parts of the country.

She is very optimistic about the future of EI companies generally and this optimism is positively influenced by the recent PMI data (Purchasing Manager’s Index) which is at its most positive in the past 6 years.

One thing Julie would like to see is more female entrepreneurs and she made the point that of the 250 senior management personnel in 100 companies that EI have recently supported only 8 of the executives were women. Julie puts this down to a lack of female role models, an unjustified lack of confidence and the fact that the average age of the entrepreneurs EI supported is 32 which is an important age in a woman’s biological cycle.Julie also said that 50% of inward entrepreneurs are now people with no Irish connections at all but who want to locate here because of Ireland’s strong entrepreneurial culture.

Julie described the challenge of scale facing Irish companies which is seen in the fact that Ireland has a small number of very big companies and a very large number of small companies. She says we need more very large companies but also that many of the small companies need to be helped scale up if they are to make an impact internationally and realise their full potential. She said that many of the executives of small companies have very little practice of pitching their businesses for big overseas orders and suggested that this was an area where executives in big companies could help them as they are invariably strong at this from years of experience in making high level presentations.

Julie said that of late there has been much more collaboration between the IDA and EI and she sees this increasing over the coming years. She is clearly in favour of this and the audience also expressed a desire for more of this.

One final area where Julie would like to see progress is more link up between industry and schools. In particular entrepreneurs could be invited into schools to talk about what it’s like to an entrepreneur and encourage more young people down this route rather than take the standard career options choices.

All in all an excellent and thought provoking presentation which was well received by a large and appreciative audience made up mostly of entrepreneurs who are also business mentors.

This site uses Akismet to reduce spam. Learn how your comment data is processed.

Latest on the blog

Apply to become a Mentor

Find out more
We use cookies on our website to give you the most relevant experience by remembering your preferences and repeat visits. By clicking “Accept All”, you consent to the use of ALL the cookies. However, you may visit "Cookie Settings" to provide a controlled consent.
Cookie SettingsAccept All
Manage consent

This website uses cookies to improve your experience while you navigate through the website. Out of these, the cookies that are categorized as necessary are stored on your browser as they are essential for the working of basic functionalities of the website. We also use third-party cookies that help us analyze and understand how you use this website. These cookies will be stored in your browser only with your consent. You also have the option to opt-out of these cookies. But opting out of some of these cookies may affect your browsing experience.
Necessary Always Enabled
Necessary cookies are absolutely essential for the website to function properly. These cookies ensure basic functionalities and security features of the website, anonymously.
Functional
Functional cookies help to perform certain functionalities like sharing the content of the website on social media platforms, collect feedbacks, and other third-party features.
Performance
Performance cookies are used to understand and analyze the key performance indexes of the website which helps in delivering a better user experience for the visitors.
Analytics
Analytical cookies are used to understand how visitors interact with the website. These cookies help provide information on metrics the number of visitors, bounce rate, traffic source, etc.
Advertisement
Advertisement cookies are used to provide visitors with relevant ads and marketing campaigns. These cookies track visitors across websites and collect information to provide customized ads.
Others
Other uncategorized cookies are those that are being analyzed and have not been classified into a category as yet.
SAVE & ACCEPT